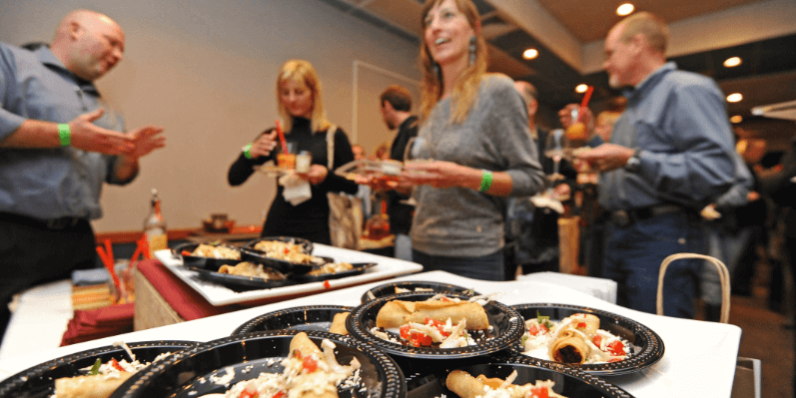 An event that features dozens of food stations for guests to make their way through is coming to North Tahoe. “Passport to Dining,” which takes place from 6-9 p.m. on Nov. 9, aims to transform Tahoe Biltmore into a foodie haven on the North Shore.
“This event is what we call North Tahoe’s most flavorful fundraiser,” said Joy Doyle, executive director of North Tahoe Business Association (NTBA), which is sponsoring the event. “It’s super fun to attend because you get to taste different food, wine and beer from a variety of local and regional providers, so it’s a great way for us to showcase our restaurants and regional wineries and breweries,” she added. This year, a portion of the event’s proceeds will be donated to Project MANA, a nonprofit organization dedicated to reducing the incidence of hunger and its detrimental effects upon individuals, families, the community and region. “The funds generated also support the North Tahoe Business Association, a nonprofit organization which benefits the community,” Doyle said. She said one of the most well known examples of the NTBA’s work is the Kings Beach commercial core improvement project, which realigned the highway from four lanes to two with a center lane, and added sidewalks, streetlights and a bike walk. The organization, which has more than 200 members, has been working to support community projects since 1979. Some of its initiatives include hosting 15 annual special events, producing the North Tahoe & Truckee Leadership Program and enhancing public art displays.

Passport to Dining is the largest fundraising event of the year for the NTBA, and has become known as a locals’ hangout with nearly 95 percent of guests being locals. “It’s highly social and attended primarily by locals. Over the years, it has the byline of being a not-to-miss social event,” Doyle said. In addition to bringing community members out for a fun night, it’s also a way for restaurants to show guests what they’re all about. “Well, it’s probably the best event for the locals around here, for them to get together and get to experience different restaurants,” said Monte Webb, owner of Jason’s Beachside Grille, which participates year after year. “We’re doing the baby back ribs, which are on our menu. They’re one of, if not the best selling dish we have,” he added.