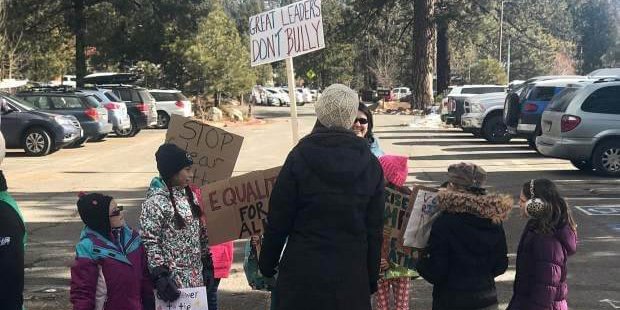 Displayed on handmade signs and even a quilt were positive messages of inclusion, protection and holding ourselves responsible for teaching young children.

Last Saturday, Jan. 20, marked the second annual Women’s March, a national campaign held on the anniversary of our president’s first year in office.

Representing North Lake Tahoe were more than 750 women, men and children who marched from the North Tahoe Events Center to the second roundabout, and back.

“A mile of marchers, men, women and children, came out in support of democratic values. We’re gathering the national energy voting for access to affordable, high quality health care. We want action! We want meaningful legislation to secure CHIP (Children’s Health Insurance Program) permanently, on DACA (Deferred Action for Childhood Arrivals) can be solved in one clean vote on the DREAM Act. We want community health centers funded. We want champions for civil rights and for voting rights. We want gender equity, equal pay for equal work,” said Theresa May Duggan, an organizer of the march and member of the Sisterhood of the Resistance. Among the marchers was Krista Tranquilla, a local artist whose jewelry can be found around North Lake Tahoe.

Tranquilla had her two daughters with her, age 11 and 7. She said that exposing her girls to the march is important to her as a parent.

“I like this initiative. They need to understand how to stand up for their rights,” she said.

When asked what they thought of President Donald Trump, her daughters said they don’t like him.

As marchers were mingling and motivating one another, Heidi Doyle and her dog Jasper stood out. Jasper was wearing his “I’m With Her” campaign shirt.

“Well we had to pull out his campaign shirt, of course,” she said.

Doyle said she was proud to be marching, knowing her sisters and family members were marching in solidarity from Los Angeles to Washington D.C., Michigan, and New York.

“It’s important to be part of the worldwide movement to make the world a tolerant place,” she said as her motivating force in participating.

For two hours, marchers took to the streets with signs displaying positive messages of inclusion, tolerance and leadership.

Amber Burke was with her mother during the march. The pair proudly walked in their hometown after taking to Washington D.C. for the inaugural Women’s March.

“D.C. was electric. There were all ages there, girls with their dads, the whole city was just covered with women. Here in Kings Beach it’s the same, that sense of unity among all of us, it’s awesome to see that people are still engaged and this didn’t fade out,” she said.

Moving forward, Duggan and her fellow organizers say their mission is to educate their neighbors so they can vote to protect their rights.

One of their biggest motivators is encouraging more women to hold government positions.

“We are organized, we will mobilize and we will vote,” she said.