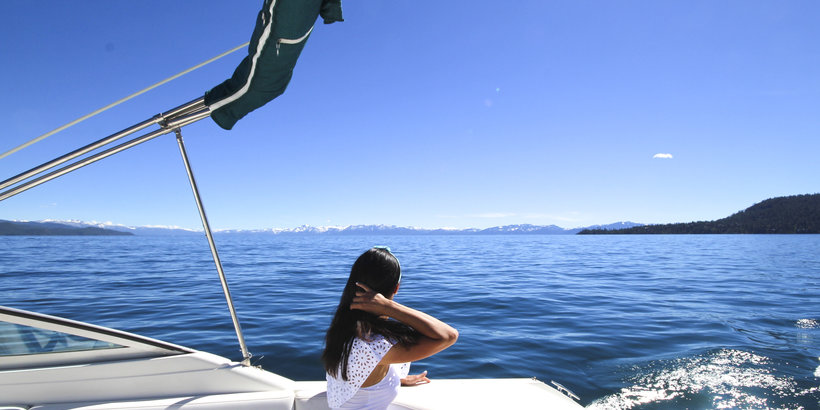 I threw my head back laughing harder than I had in a good while. Maybe it was the Zinfandel the raspy-voiced waiter playfully called “jam” as he poured us a second – or was it third? – glass, but it was in that moment I realized I had found the real treasure of this place: it was hidden in the stories and the people, not the waters.

It all started when I heard that Lake Tahoe might just be the bluest place in the country. A fierce lover of all things nature, I had to find out for myself. I was connected with Go Tahoe North, which I was later able to confirm is the bluer side of the lake, and as the plane descended, the cobalt dot increased in vibrancy as the miles between us decreased.

I was on a quest to live like a local for five days and really dig into the area’s culture and history. My lack of previous knowledge — or travel companion — made me open to receiving whatever this new destination would bring me. A piece of self-awareness, new friends, or maybe just some new perspective.

For lodging, I chose a vacation property through Tahoe Luxury Properties. The 5-bedroom home with a view of the lake, appropriately named Azure, had floor-to-ceiling glass windows and lodge-like wood beams supporting the A-frame main room. An oversized deck welcomed me in the early mornings, along with the crisp air and slow sunrise. I made a point to hold my coffee with both hands and close my eyes each time. In the evenings, a glass of red replaced coffee and a blanket curled its way around me.

My first morning brought me up Crystal Bay Fire Lookout. The easy hike was manageable for my jet-legged self, and reaching the top awarded me somehow nostalgic vistas — the rising sun, still a warm gold, danced with the many shades of blue reflected in the water. It was a sight to behold, and I was hooked.

For lunch, you won’t find any big chains. These folks keep it small and continue to build up local businesses, resulting in a cuisine that is carefully crafted over decades, and even better stories to come with it.

I peeked in at Mountain High Sandwich Co., a local deli that only serves organic and locally grown food. After fighting a bit a line — always a good sign in my opinion — I ordered the Tri-Tip sandwich, and a cold-pressed energizing blend of carrots, oranges, lemon, and cayenne.

I found that Tahoans love to show off their slice of heaven to outsiders, and this came in handy when I befriended some friendly locals who offered to show it to me by boat. I canceled whatever other plans I had for the afternoon and jumped at the chance to get on the water. Navigating across this contained ocean was almost too much to take in for a first-timer like me — the skies met the water creating an endless canvas of blue, making it impossible to tell where one ended and the other began if I squinted just right. For a moment I stared and waited for the view to sink in, wistfully knowing that neither picture — or write up — would do justice to the feeling it gave me.

For the adventurous types, jet skiing and parasailing tours were available. For those of us saving our energy, people watching on the rollicking docks and private beaches was considered an equally appropriate a way to spend the day.

For dinner, I visited Wolfdale’s Cuisine Unique, home to an uncomplicated fusion of European and Asian cuisine with a decisive Californian twist. Resting atop the Sierra Nevada Mountains and open since 1978, Wolfdale’s clever culinary surprises reside inside an unassuming facade, accompanied by one of the best wine lists I found. I attempted to hurry out thinking of the long wait, and was instead encouraged to linger a little longer — so I ordered that second dessert, inched my chair closer to the sunset, and settled in.

After a good night’s rest and a justified late start to the day, I used the late morning to get a lay of the land. Skipping my home brew in favor of a more elevated breakfast at Manzanita at The Ritz-Carlton, Lake Tahoe, I drove across state lines into California. The change is subtle but detectable. By now I had solid grasp on the lake vibe, but here — in the mountains — it was quieter, more serene. My breakfast game had been a little weak, so here it was all about the steak and eggs. A much more modern than expected dish was delivered, and my fork found its way into a peppery braised short rib topped with a runny fried egg, as marinated tomatoes and pickled onions rounded out the perfect bite.

After one or two or seven cups of coffee with a view of the mountains, I dragged my suntanned, exhausted body to the spa for some much needed pampering. A custom facial and a dip in the private plunge pool, followed by a treat in the cabana was all I needed to decide this was indeed, the most relaxed I’d been in a long time. I dusted off a book I’d optimistically packed and pulled the hooded robe tighter around me, children’s faint screams and splashing coming from the main resort pool far, far away.

Skin and spirits aglow, it was time for the mandatory tourist stop: A tour of Thunderbird Lodge. Original owner and billionaire heir to the PG&E fortune George Whittell Jr purchased the 27 miles of Lake Tahoe shoreline in 1935 and built a series of buildings to form the estate. The main house has no guest rooms, but he lived on the property with his third wife and exotic animals, including Mingo, an Indian elephant.